In October of last year Gavin Wilson of the Guitarz Blog posted a blog asking where He could get a cheapish double neck guitar with a 6 string and bass configuration with the bass on the lower part.
I bravely stepped up to the mark and offered my services which where gratefully accepted.
Gavin told me that he wanted something a bit jaguar jazzmaster type  with a smallish body. concentric knobs individual switches for each part. He was to supply the necks and pickups and bridges. 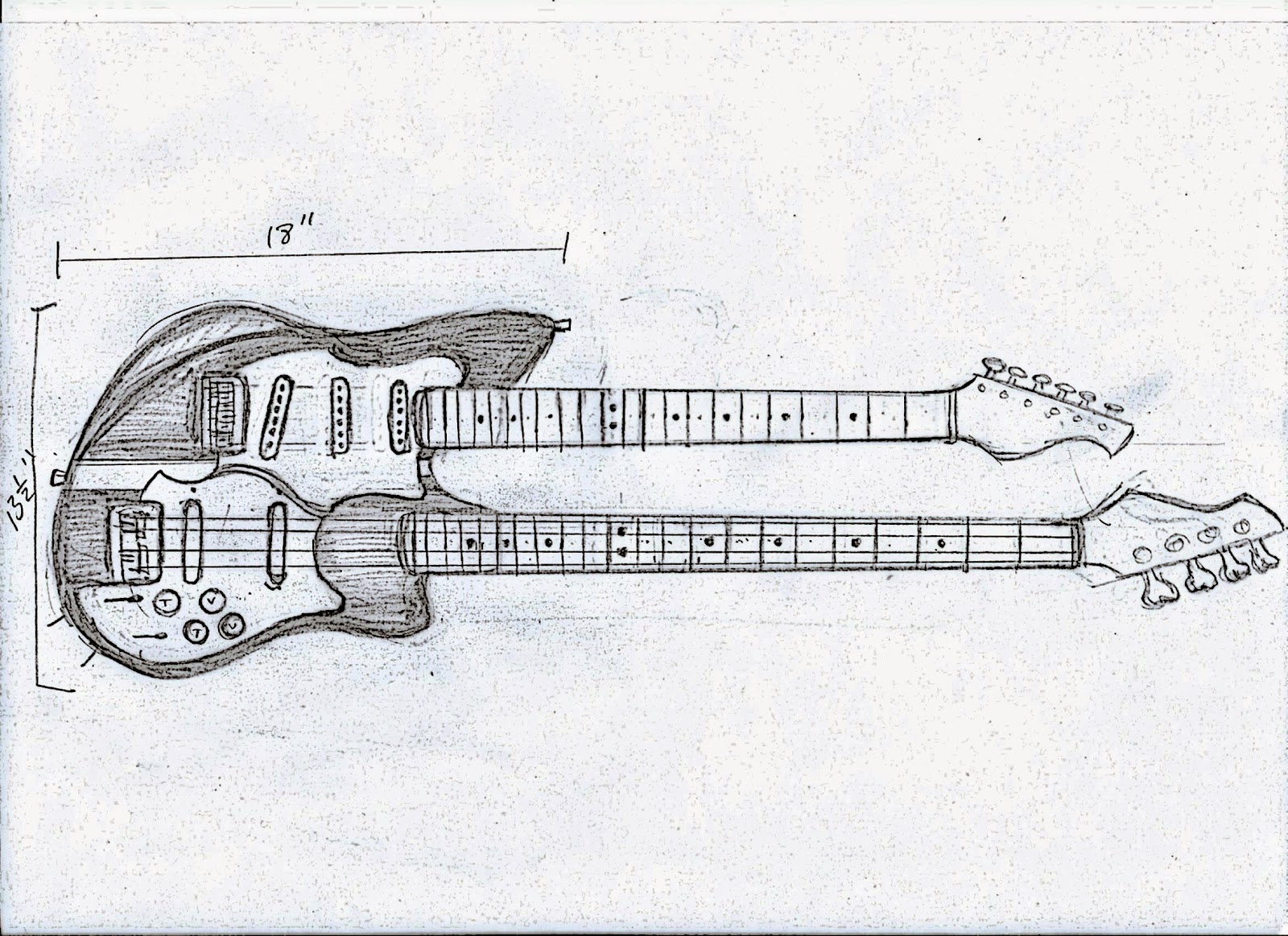 Mockup which doubled as a template. 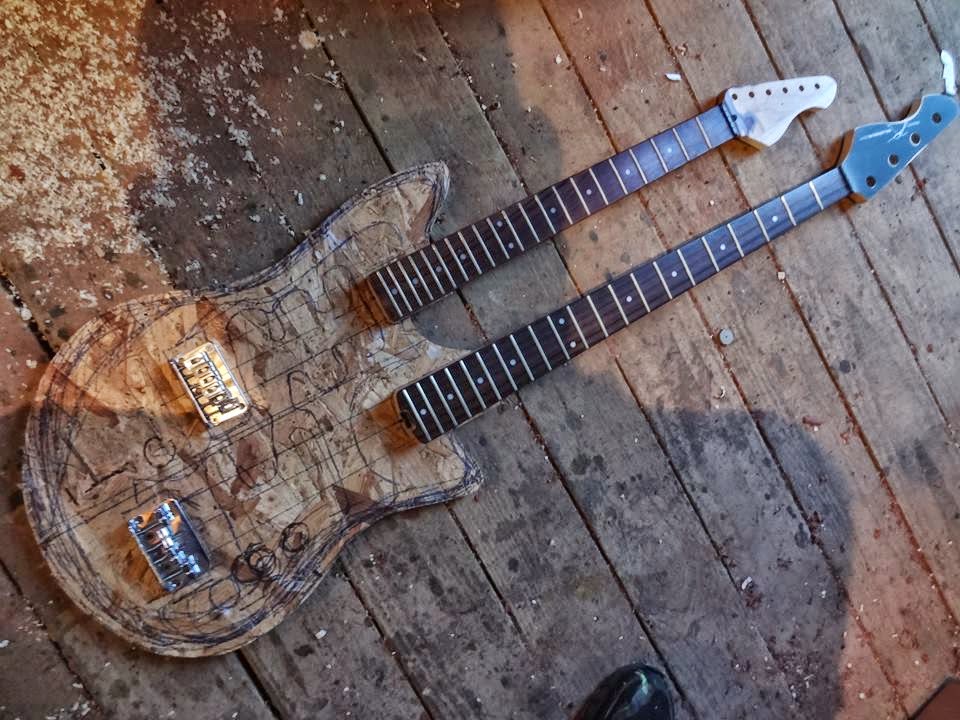 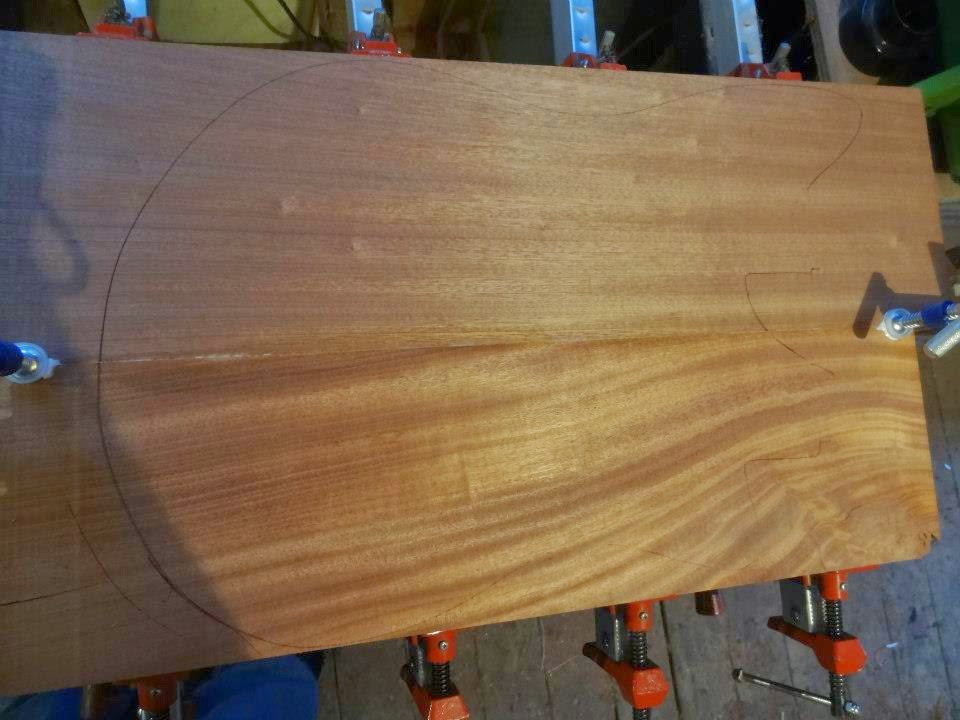 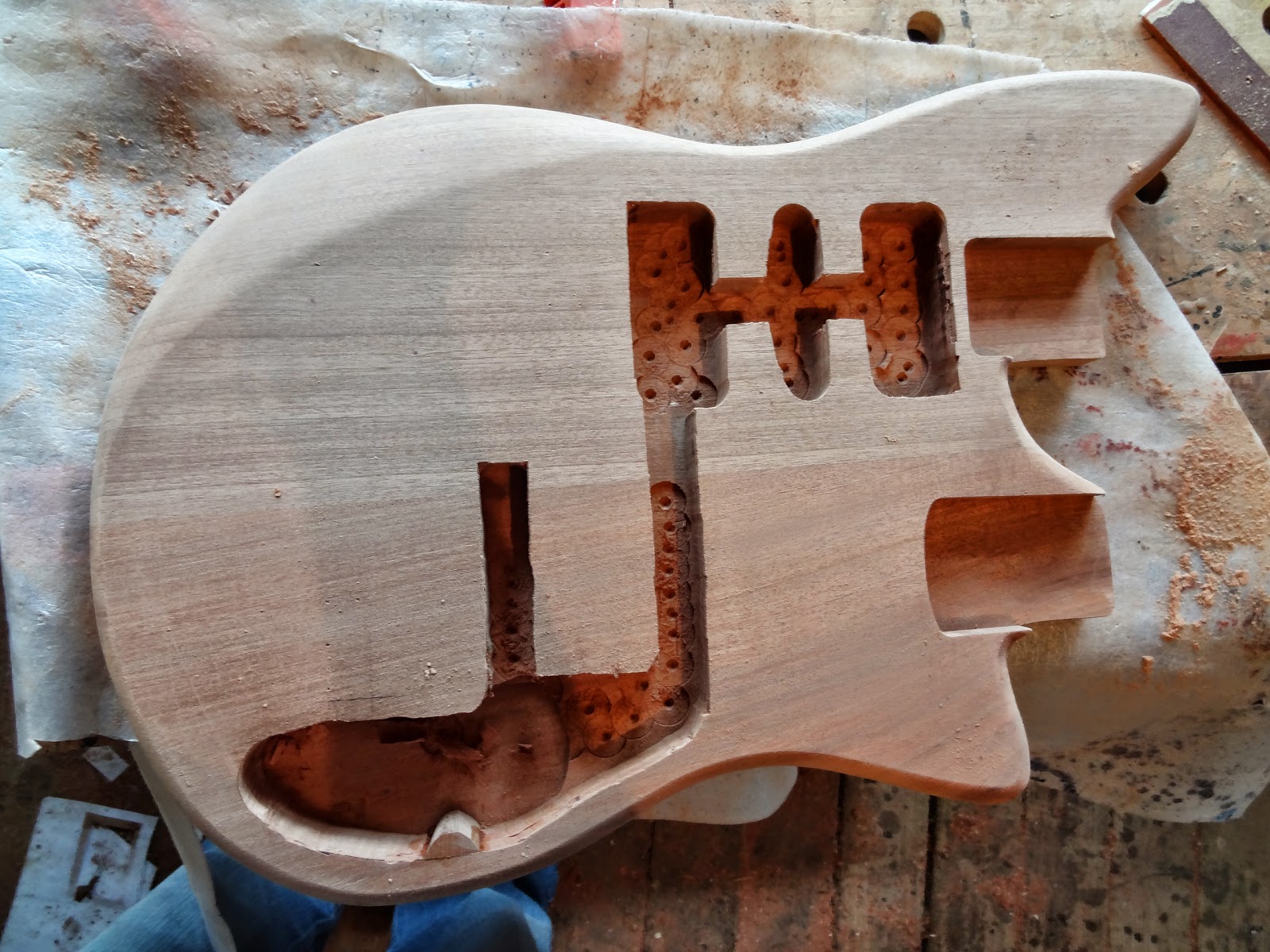 The doner guitar neck. An old neck with a chopped headstock and rusty old open geared machine heads. I added an extra piece of maple and shaped it to my headstock design. The bass neck doner was a new Peavey neck which I reshsaped the headstock to match.

A normal strat body on top to show the size. Unlike most double neck guitars which are pretty much two guitar bodies joined together with resulting size and weight issues. 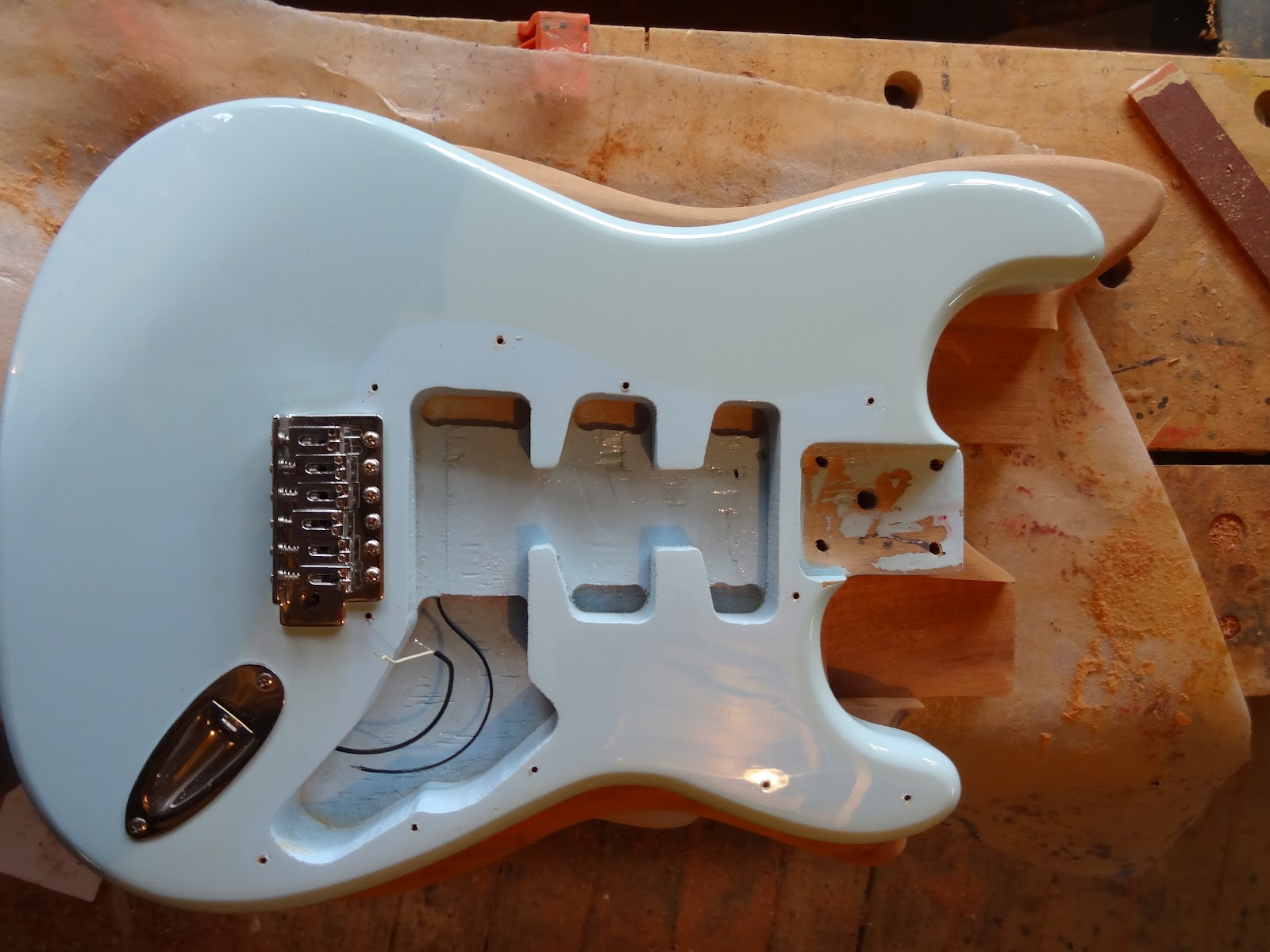 Scratchplate template made from clear Perspex. Just managed to squeeze it onto the blank scratchplate material. 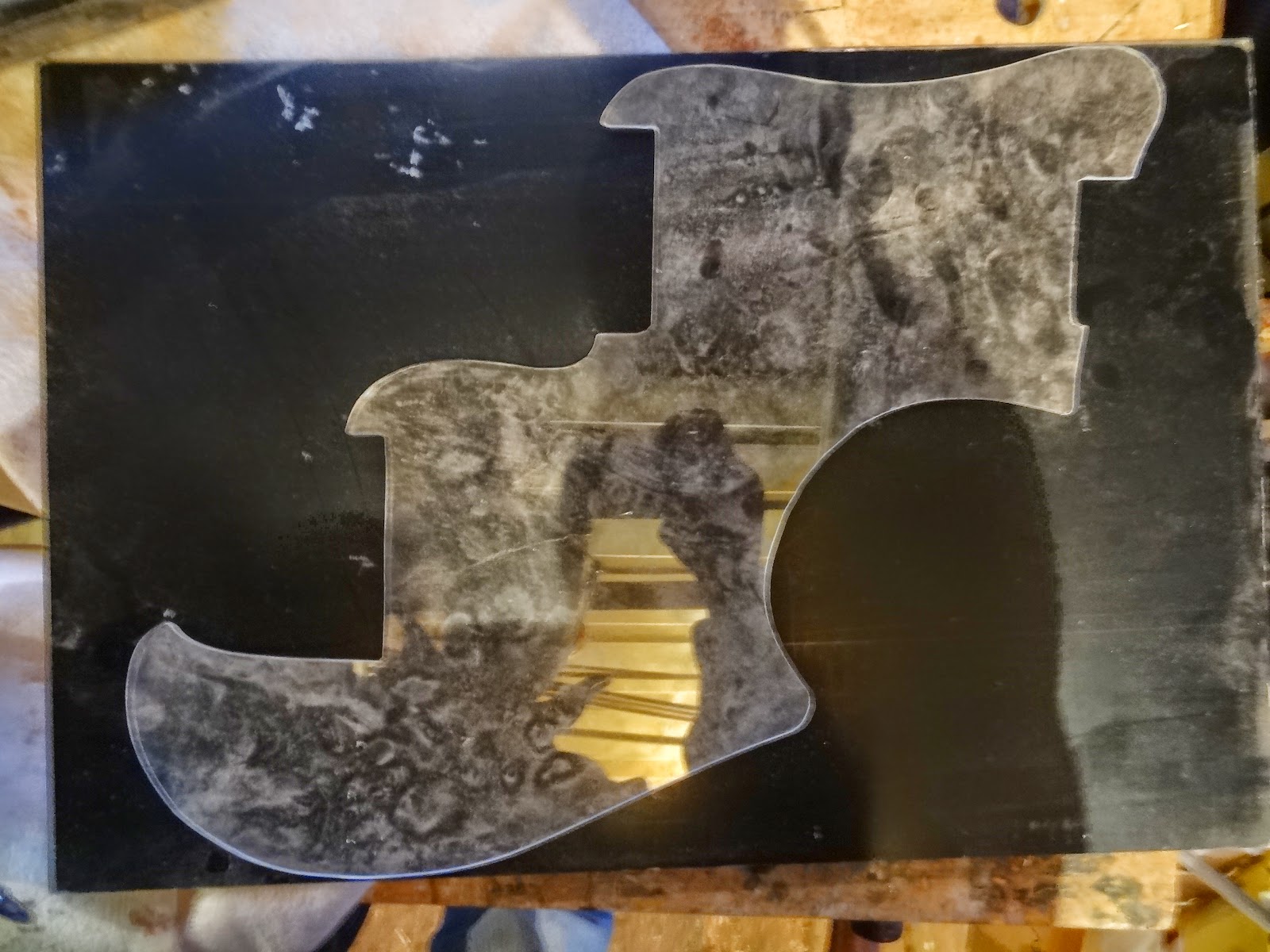 Initial hand rubbed stain. I liked but I wanted to go for a darker tobacco burst so ended up doing a spry finish with a matt top coat. 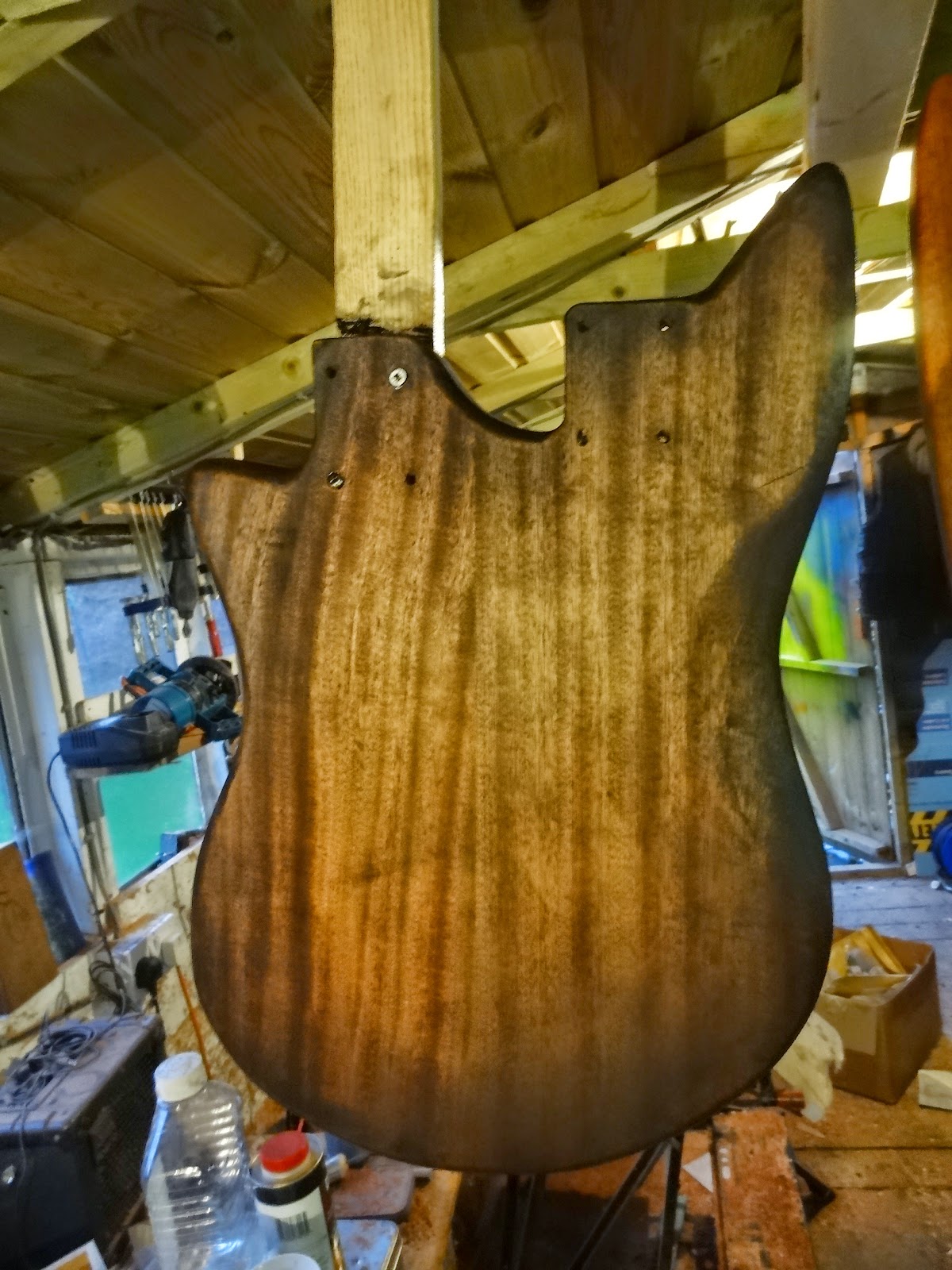 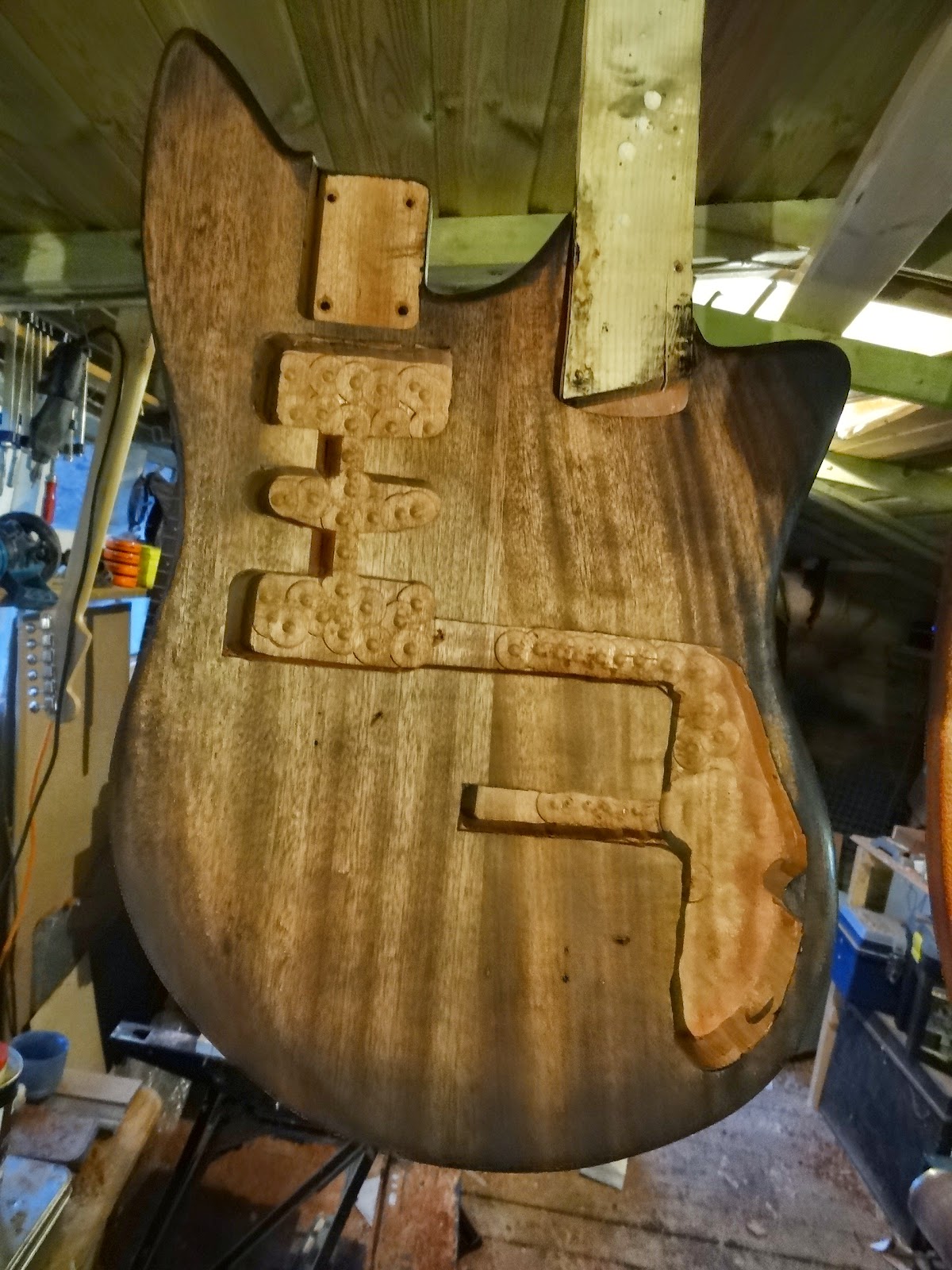 Trying out the scratchplate and bridges. 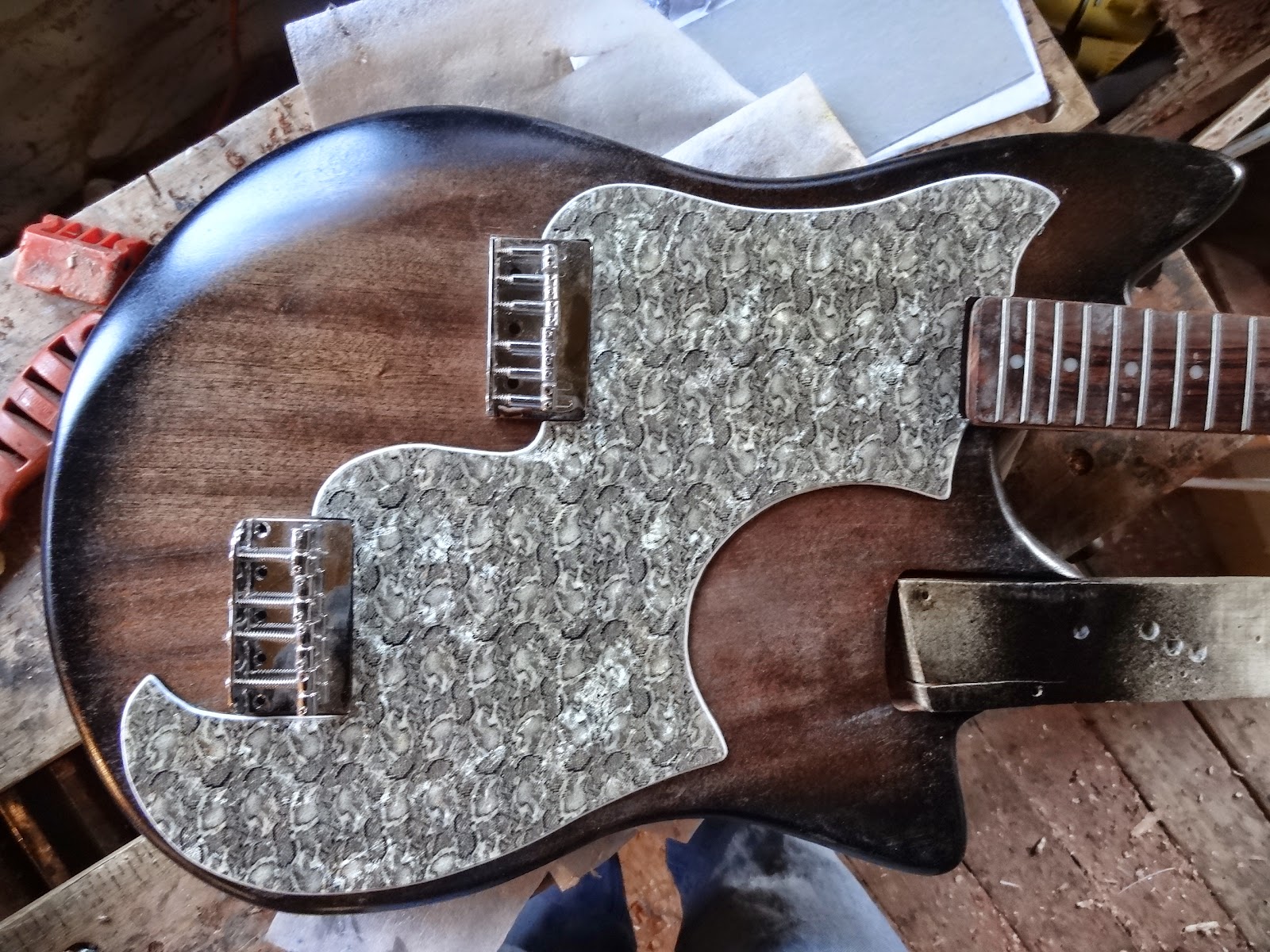 Considering this was uncharted territory for me the whole process went reasonably without hitch.
The wiring to Gavin's request and to my liking of simplicity was volume and tone for each guitar with concentric knobs. selector switches and an on/off switch for each part. both wired to a stereo output rather than two seperat jacks. All is needed is  a stereo splitter lead.
Here is the finished product. As you can see I've been making a little extra effort in the photography department.
It's almost identical to the original drawing with the exception of a slightly more rounder bottom which I didn't intend and only really noticed in the later stages. However when I put it on a stand I realised this was probably a favourable outcome as the only readily available stand it's going to fit on is an A type where the body is supported at the rear. too much of a slope would have it at a jaunty angle.
In Hindsight I thnk I would have made the body shorter by an inch or so. but as a design I really like it aesthetically and functionally. 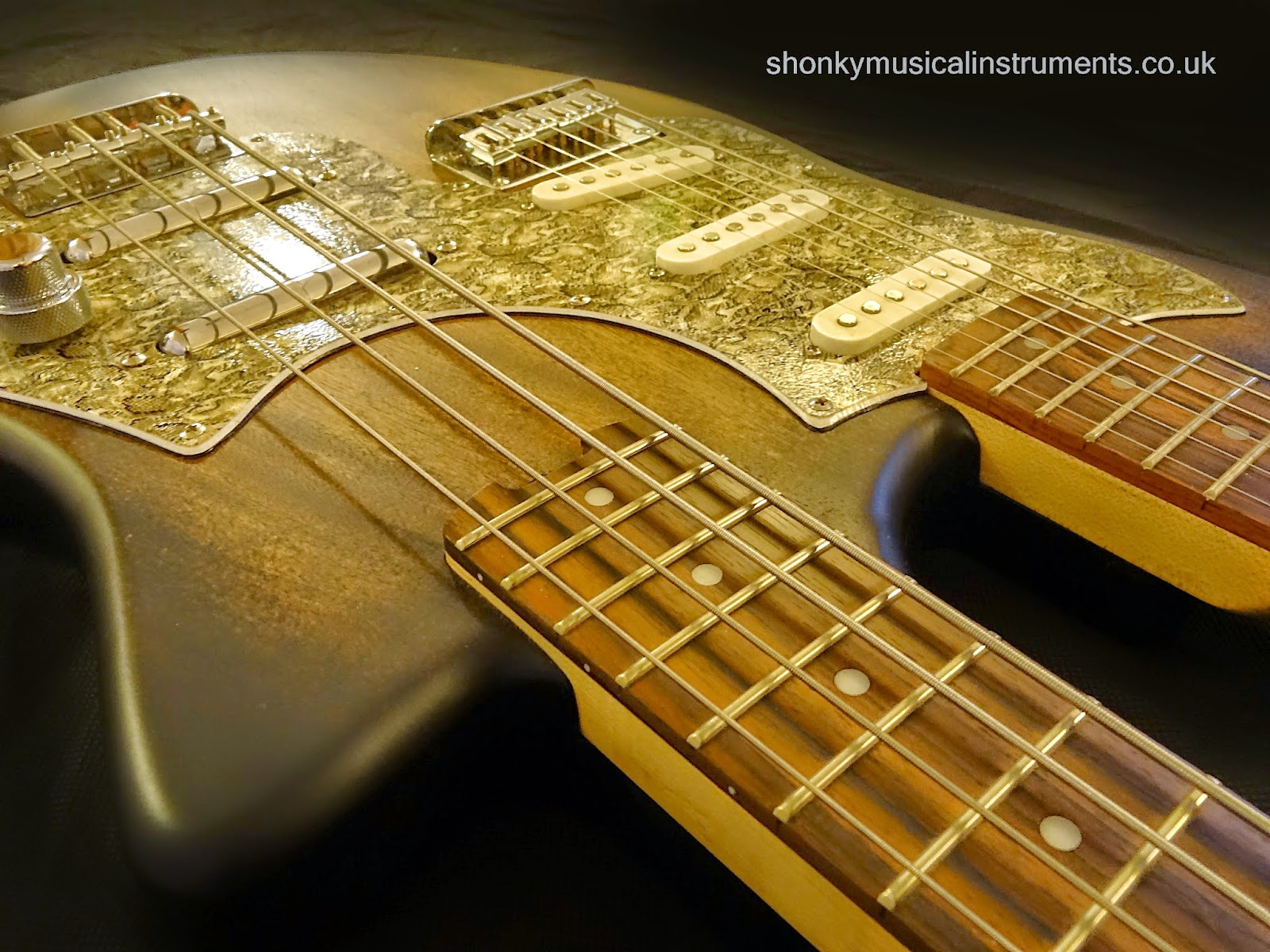 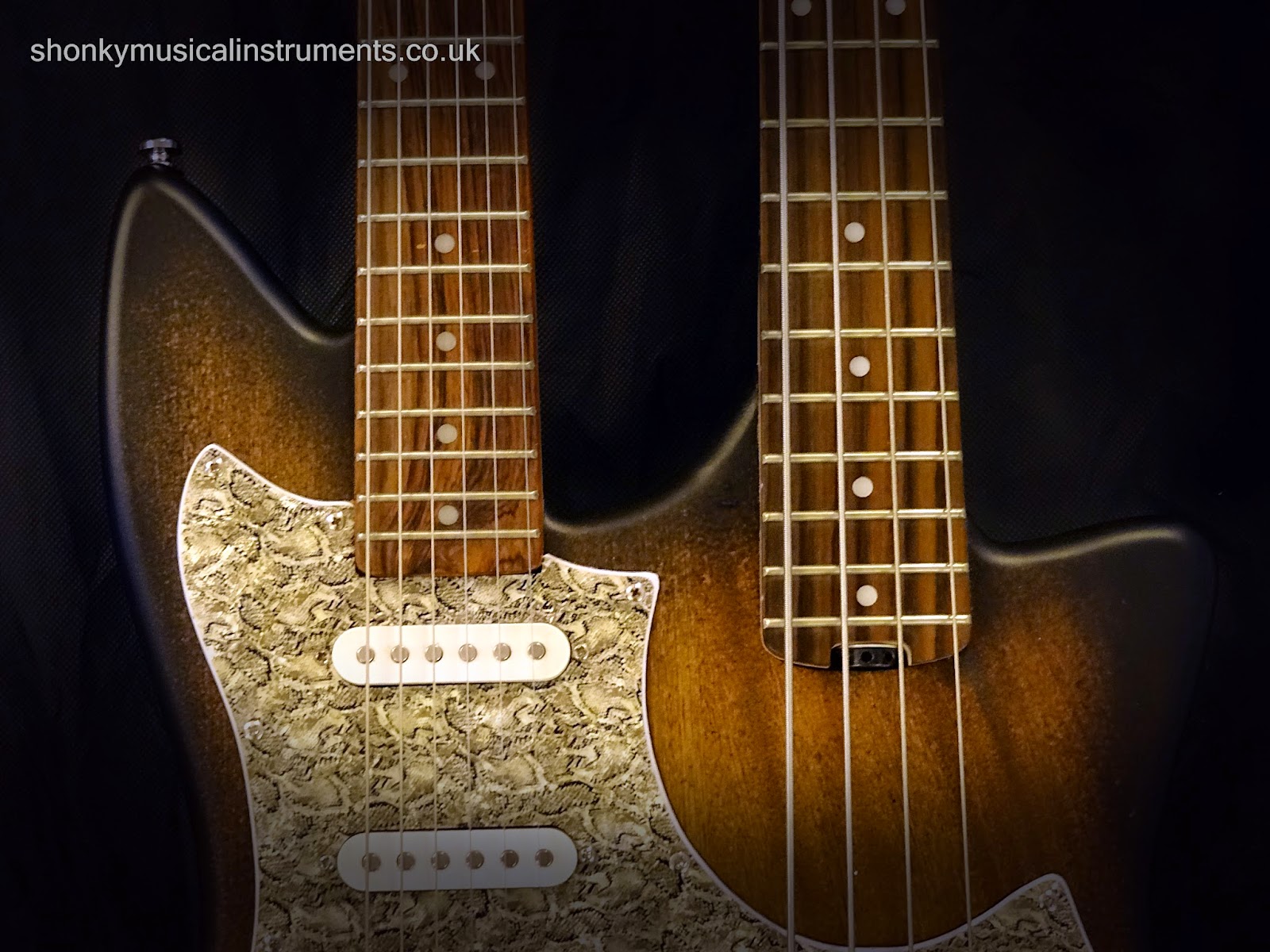 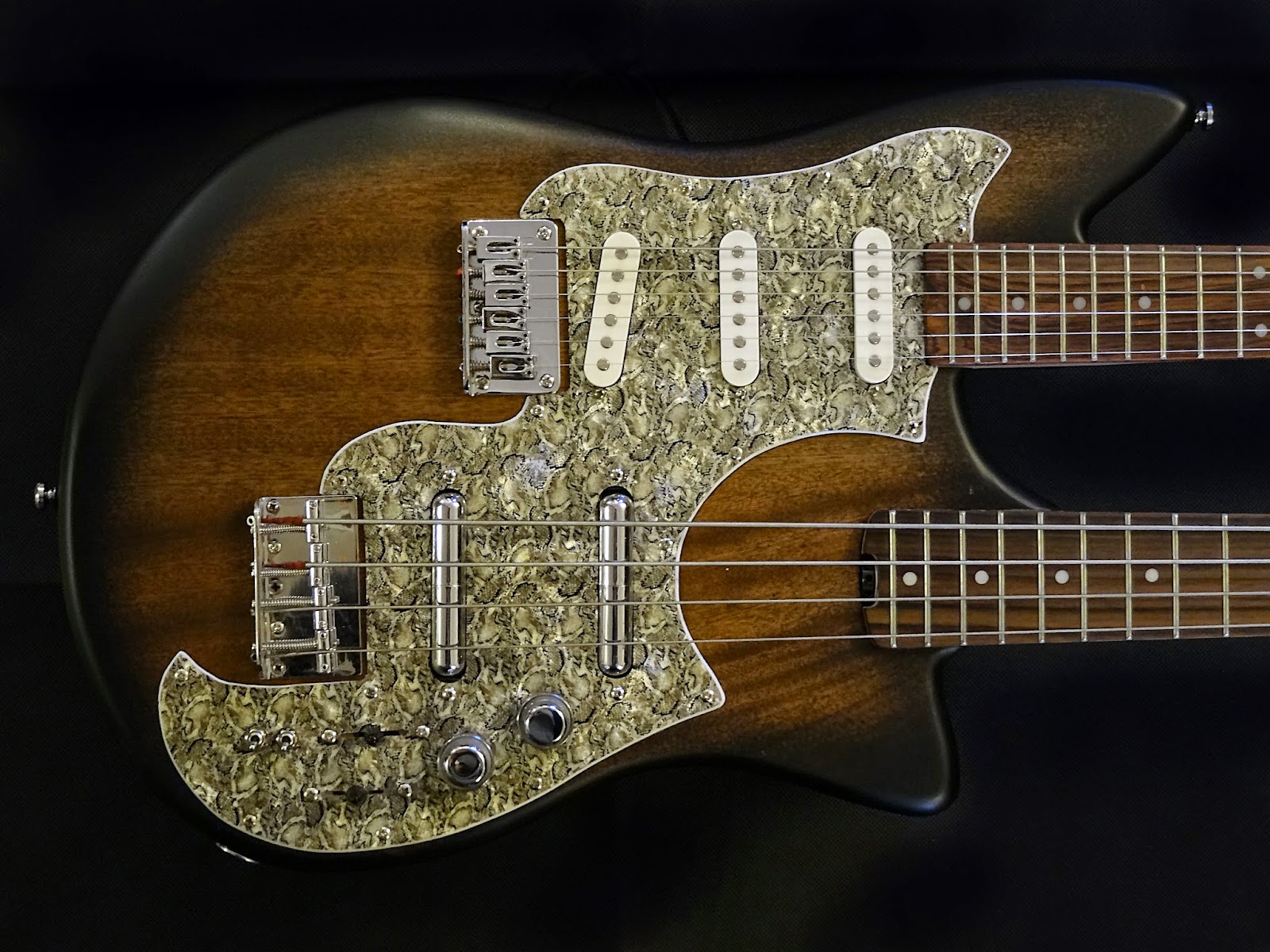